with our consumption levels 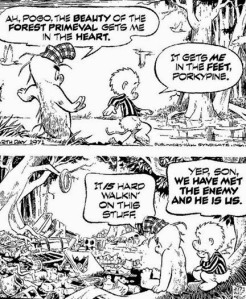 I have just watched Before The Flood, a film about climate change. And again that sinking feeling that it is missing what we all need to hear with clarity:  that the climate change problem is us, we are the problem, us with our ways. I suspect that the reason why this message is not clear enough in these films is because it is confronting to face up to our own responsibility. But this denial of responsibility is part of the climate change problem and we can no longer afford to think of the problem without owning it.

The film Before The Flood is similar to the film released ten years ago, An Inconvenient Truth, in that they are both presented by influential people. In Before The Flood we have Leonardo DiCaprio, and in An Inconvenient Truth we have Al Gore. And both films end with a list of practical things we can do, -presented as a solution to the climate change problem. But everyday lifestyle decisions, such as responsible consumer choices and our voting, follow from deep convictions more than by being given a list of things to do.

The climate change problem is not, as could be interpreted in Before the Flood, happening because of some big bad men, too powerful to be stopped, are destroying the world through fossil fuel extraction. The climate change problem is us. And as I explain in Uncomfortable Climate, the good news is we can stop the big bad men, we do have the power to stop them. That is: if we stop buying what they are selling us.

Also, we do not need to go back to the kind of life we lived two hundred years ago when all this started.  We now have the knowledge and technology to help us provide our needs sustainably and we can do it, but we do need to face up to our impact.  We can not go on with such high consumption.  This report by the Simplicity Institute here presents the dilemma with simple and undeniable facts.

Our impact is so large due to our lifestyle that unless we change it dramatically we will still have to face many, if not all of those feared climate change scenarios, like massive migrations, food insecurity, and destructive fires for example. This is because even if we start cooling temperatures we still have, a very altered landscape, -too much rubbish, too much pollution, finite recourses, less arable land, erosion, salinity acidification of the seas, the list goes on, and: too many people.

We simply do not have enough land and water to sustain a growing population of our kind. We know this, and so do our leaders. But most leaders have short term priorities and do not care for the future, so it is up to us to acknowledge this information, accept it now and change.

The degree of the world’s climate change problem is daunting, and it is shown well enough in these films. But like it or not, we need changes that will match the size of the problem. In Before The Flood the many terrible images of destruction due to fossil fuel extraction by powerful companies are in no way linked to our behaviour. We need to make the link between us, and the destruction. We need to make that connection. Understand that starving polar bears is us. The dying orang-utans due to deforestation is us, the gas raising in river streams is us. The impacts of our fossil fuel dependency, that is changing our climate can not be seen apart from us. And we need to make that link with the clarity it deserves.

The problem is our planes, our cars, our jobs, our food, our clothing, our gardens, our cities, the problem is, our problem.  Particularly in the US and in Australia, -the highest green house gas emitters per capita. Take for example, our unquestionable exercising of personal mobility on a daily basis for everything from work, acquiring food, and socialising. The problem of emissions comes from our fossil fuel dependent lifestyle. This is as obvious as it is neglected.

Could the truth, -an elephant in the room now, be just too hard to accept for too many viewers, and in fact the makers of such films.

The most revealing, if not depressing bit of the film for me, was Leonardo DiCaprio’s response to Dr Sunita Narain’s complaint about Americans’ excessive consumption:

“Look, there’s no way I don’t agree with you. Absolutely correct. Yes, it’s a very difficult argument to present to Americans that we need to change our lifestyle and I would probably argue that it’s not going to happen.”

Here DiCaprio admits to two things: Yes, Americans are largely responsible for the problem. And secondly that it is very hard to tell Americans that they have to change. Here he acknowledges that despite knowing it’s about lifestyle, it is a truth difficult to present. Perhaps that is why he has avoided exploring lifestyle or even giving it some time in his film. Regarding changing lifestyle he also says “I would probably argue that it’s not going to happen”.

And here is in a nutshell the problem: the people’s lifestyle is the problem, but people do not want to change their lifestyle.

Yet, I refuse to agree that lifestyle change “is not going to happen” as DiCaprio says. Such lifestyle is unsustainable; it will have to change, either by choice or force, -and preferably by choice and sooner than later.

The sooner we acknowledge that the problem is not about China and India also turning to renewable energy, -as could be interpreted from the film, the sooner we acknowledge that it is about us wealthy people of the world living with less, the sooner we can start the process of reviewing our value system and changing our lifestyle. This is what we need to do, as I suggest in Uncomfortable Climate Solution and that is precisely, and tragically, not being said with clarity in any of the mainstream approaches to the climate change problem. We now have a growing tendency in the developed world to assume green technology will save us.  But this is naive. This analysis, by the Simplicity Institute gives insight into how our consumerist values remain dangerously unquestioned.

Our Leaders are not so cool

Einstein said the famous “We can not solve our problems with the same thinking we used when we created them”. Our problem lies in the psychology of more, more money, bigger houses, more holidays, more mobility, more stuff. And our leaders are in fact role models who represent all that kind of abundance. Most have it all, the money, the power, the stuff. And we vote for them.

Our leaders should be people, who ride or walk to work, who take some responsibility for their own waste and food production, preach and practice community self reliance, compassion and cooperation. And ideally leaders should be admired and respected for their humbleness and ability to live with less. This may sound laughable or even ridiculous, but this is the truth, and part of -the solution. We can no longer pretend things are going to change if we –and in turn our leaders, don’t.

I believe that part of the reason why we are not accepting the feedback of the consequences of our lifestyle is because the leaders and role models we have chosen guide our aspirations. So we have a situation where we vote for what we want but what we want is not good for us. It is a self- feeding cycle.

Typically we have leaders who are wealthy, male, and stop at nothing. Of course Trump being now the best example of this kind. Aggressive, paternalistic, alpha men who keep telling us that they are going to give us jobs. “Jobs and opportunities” Turnbull often says. But jobs for who? Opportunities for who? Jobs that are the product of fossil fuel based economic endeavours? Jobs that are climate changing such as: mining, building roads, and exporting commodities for example? How can we address climate change with this kind of mentality?

If those jobs are to ensure that people have a home and access to education and health services lets take a closer look how we can all have that without destroying the world in the name of job creation.

The Dalai Lama said that “material wealth has limitations, mainly they provide comfort in the physical and sensory level so naturally there are limitations”. And it is no secret that we are not happier in the wealthier countries.

There are many great role models for a better future, but take David Holmgren and Su Dennet for example. A couple with a very low ecological footprint who have been working all their lives to show others how we can live a life of abundance, taking very little from the environment by restoring its fertility and practicing community and self reliance. David Holmgren was awarded the 2014 Green Lifestyle Award for his pioneering and ongoing work with Permaculture. See more here.  Could our role models be people like them? people who live simply by choice. Could we take the focus of the successful and powerful and aspire for the low impact life that those who live a simpler life have?

These are the questions we need to ask ourselves if we are serious about the future.

For there to be hope for our children we need to reduce our consumption significantly now, think small, not big, think humble, and accept that our consumption translates into waste and less land for others including our descendants.

Before The Flood is available for free online, on National Geographic’s YouTube channel.